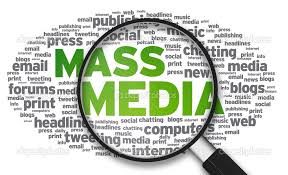 The definition of mass media would be means of technology that is intended to reach a mass audience. It is the primary use of communication that can be used to reach and communicate a message to the general public. The most common platforms for mass media are newspapers, magazines, radio, television, and the Internet. The general public tend to rely on mass media to provide information regarding political issues, social issues, entertainment and other news material.

Mass media has a significant role in modern culture and it has evolved significantly over time. Have you ever thought about how the latest news and information was communicated in the past? Well, before the internet, television or the radio there was the newspaper. For a very long time there was the newspaper which was the original platform for mass media. The public relied on writers and journalists for the newspaper to provide them with the latest news and current events. Centuries later came the invention of the radio. This quickly became more popular that the newspaper and quickly became the most popular source of mass media.

Later on came the invention of the television. The television quickly replaced the radio for the most effective platform to reach the general public. Presently, the internet is the most relevant source of mass media and has a major tool of acquiring and sharing information. Since the evolution of the internet, the public is now able to access the same news material with just a click of a button.

The mass media has a major impact on certain topics and our opinions. People are continuously bombarded with messages from a number of different sources including TV, billboards and magazines just to name a few. These messages promote not only products, moods, attitudes but give a sense of what is important and what is not. Just to give an example mass media makes the concept of celebrity possible. Without movies, magazines, internet and television people could not become famous.

Many have argued about the role that mass media plays. Sociologists, media executives, educators and law makers have all debated this controversial topic. While the opinions vary as to the extent and type of influence the mass media has on people, all people involved are that mass media is a permanent part of modern culture.

While the positive aspects of the media cannot be overlooked a lot of research has shown that the media has a lot of negative effects. Many studies have researched the impact of television on society in particular children and adolescents. The three main behavioral effects that are connected to the media are violence, prejudice and sexual behaviour. Violence is one of the most behavioral effect that received attention. Young people have trouble distinguishing between the real world and the world that is portrayed on television. Children spend a lot of time watching television and very often they do this without any supervision. When children see certain visuals they start to believe that it is ok for them to do the same.

Prejudice and stereotypes is another concern for those who study the way mass media influences society. Prejudice can include sexism, racism and other forms of intolerance. The media encourages stereotypes which are generalisations based on assumptions or limited information. For example it is very common that mass media portrays women as inferior and in limited roles. Repetition of such roles gives the impression that it is the norm and that is a true picture of the way things are.

Television is a powerful tool however it becomes very clear that the media has an effect on people and the way they think.