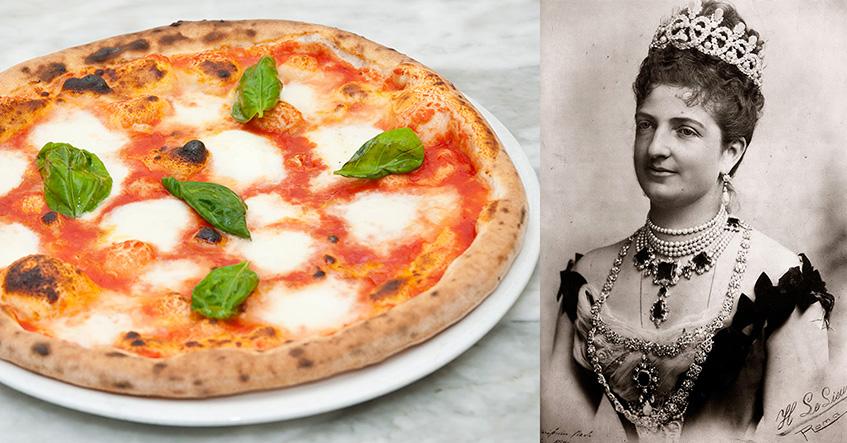 Pizza did not originate in the country for which it now famous. Yes, Iike many people, I always thought that Pizza originated in Italy. The origin of the word pizza is debatable. It is Italian for ‘pie’ and may have come from Latin ‘pitch’ or Greek ‘pitta’. However, the history of pizza goes a long way. The roots for Pizza were originally laid by the Greeks who first baked large, round and flat breads which they covered with oils, herbs and cheese. The first major change in the pizza was the use of tomato as a topping.

While it is difficult to pinpoint who invented the Pizza, it is generally accepted that modern pizza was first made by baker Raffaele Esposito of Naples. Legend has it that the most typical Pizza, Pizza Margherita, was invented in 1889 in honour of Queen Margherita. Around 1889, Queen Margherita, accompanied by her husband went to Italy to visit her Italian Kingdom. Throughout her visit she saw many people, peasants in particular, eating the large flat bread. She was curious and ordered her guards to get her a piece of this bread. Raffaele Esposito decided to make a very special pizza for her and added cheese, tomatoes and fresh basil to represent the colours of the Italian flag.

This became her favourite Pizza and when the word got out it became very popular with Italian people. From then on there was no looking back, there was no question that Naples had the best Pizza.

Italian immigrants took their beloved Pizza wherever they went. It made its way to several countries such as Spain, France, England and the United States. Gennuardo Lombardi was the first person to open an American Pizza shop on Spring Street in New York City in 1905. Pizzerias started opening everywhere and borrowing non- Italian ingredients. Even non- Italian restaurants started serving Pizza until it formed a league of its own.

Pizza has gone a long road since its invention and is one of the  favourite food for people from across the globe. Many cultures have adopted Pizza to their own liking such as the Hawaiian Pizza, Greek Pizza or Mexican Pizza.

Take a bite out of that cheese slice of heaven and get ready for some saucy facts about the Pizza:

If you ever wondered why Pizza managed to become so popular, the answer is very easy. The Pizza is very easy to make and offers infinite possibilities and variations with the crusts, sauces, cheeses and different toppings.